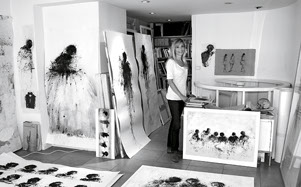 She is soon supported by influential actors in the art world such as Pierre Cabanne and Cecile Debray. Many exhibits in art fairs (FIAC 1990) and art galleries (France, USA, UK, Denmark…) followed over the next 20 years.

Hanna Sidorowicz’s work occupies a unique place in the art market today. Decidedly influenced by the old masters, Leonardo Da Vinci or Rembrandt and by the great abstract painters of American origin, she builds a body of work steeped in mixed and suggestive references in which architectural elements surface interlaced with calligraphy or quivering and shimmering surfaces of tempera. Her work on the idea of palimpsest and fragments, symptoms of an obsession with pictorial memory, inscribes itself in today’s questions about art and humanism and the future of painting.

This sidorowiczian universe, peopled with angels, the faces of wise old men and colored sketches inspired by the canvases of the great masters of the 20th century produces a cultivated and refined work, a sort of visual thought incarnated in colored matter and line.